As I have mentioned before, I used to live in Virginia before rooting in potato-land Idaho. Every time I go back, there are specific places I like to go to. And I’d like to share them with you. If you ever go to Virginia, check some of these places out. Or if you’re in Virginia, you may discover a new place to check out. And you may notice that the majority of the places are in Richmond. That’s because I used to live in Richmond. Anyway, let’s go: 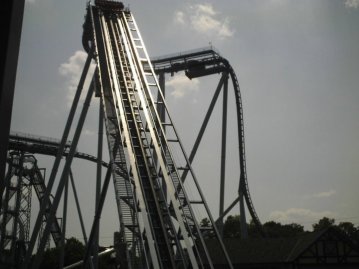 The first place is Busch Gardens, in Williamsburg. In my opinion, this is the best theme park. Yes, even better than Disneyland, fight me. It’s also called Busch Gardens Europe, as the park is separated into various European countries, such as England, France, Italy, and Germany. It’s very well-kept and entertaining, no matter what you like in a theme park. My favorites are the river dancers in Ireland, the whirlwind in Germany, and Verbolten in Germany. My roommate also recommends the shops in Ireland, the Clydesdales in Scotland, and the Loch Ness Monster in Scotland.

The second place is Carytown, in Richmond. In the artsy section, this street in Richmond has a bunch of quaint shops and an old theater. I love the theater, even if it has become for movies rather than plays. The chandelier itself is something to see. Shops of interest include World of Mirth, For the Love of Chocolate, and Galaxy Diner.

The third place is the Edgar Allan Poe Museum, in Richmond. If you didn’t know, Poe used to live in Richmond. His old home was turned into the museum, and it now holds a lot of his possessions. It’s full of his history and how his stories have left an impression. And, of course, I have to include it in this list since Poe is my homie.

The fourth place is Belle Isle, in Richmond. In the middle of the James River sits an island once used in the Civil War as a POW camp. Now, it’s a place to bike, hike, and kayak. It’s a beautiful place, and if you really like to walk places, this is perfect.

The fifth place is Chincoteague. This is a place on the Eastern Shore where wild horses run free. Also known as the Chincoteague ponies. It’s cool to watch them.

The sixth and final place is Hollywood Cemetary, in Richmond. This is going to sound super weird and kinda creepy, but this is my favorite place in Virginia. Yes, that’s right, a cemetary is my favorite place. Hollywood Cemetary holds a bunch of history, beautiful architecture, and it is always peaceful. No one is loud and rambunctious at a graveyard. No one is getting drunk off their ass and trying to catcall. No one is rude or inappropriate. I love walking around in peace, looking around at the history and art.

And those are some of my favorite places in Virginia. Idaho definitely has its places of interest, but I do miss some parts of Virginia. No matter where you live, there is an interesting sight to see or place to go.